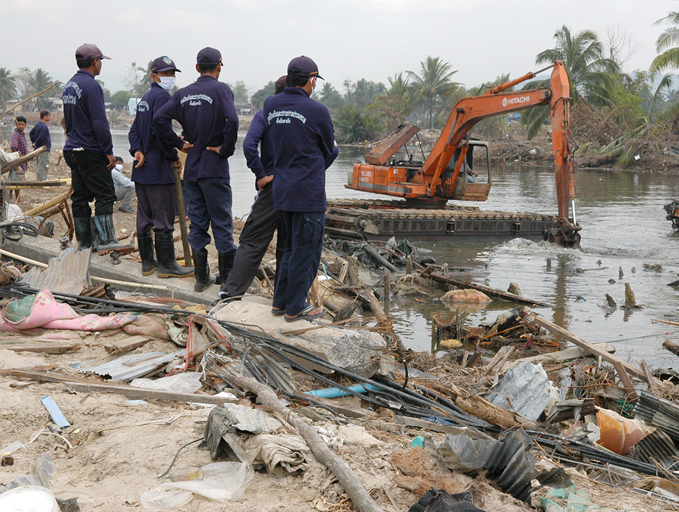 Natural hazards come in all forms, from the current devastating floods in central Europe to tsunamis such as Boxing Day 2004 that killed 230,000 people in and around Sri Lanka and Thailand.

But despite the outstanding efforts of aid agencies, is there more that the international community can do to alleviate the suffering of millions of people around the world?

That is the focus of vital research being carried out by Dr Lauren Traczykowski, a senior lecturer in law ethics at Aston University.

Dr Traczykowski, who contributed to the Hurricane Katrina response while at the US Federal Emergency Management Agency (FEMA), spoke about her work as part of the 'Society matters' podcast series, presented by journalist Steve Dyson.

She calls on the international community to agree on a new policy for intervening when sovereign states are unable or unwilling to do so that accounts for international ethical obligations.

She said: “Unwilling countries are those who might be offered assistance but refuse it or refuse to ask for assistance even though they need it. It could be a belief they have it covered, or they might worry that any foreign assistance will overwhelm the domestic response operation.”

Dr Traczykowski explained that in the case of the Boxing Day tsunami there was actually too much of certain things. But she added: “Then there is the worrying reasons of just hubris, arrogance and, most worrying would be something I really hope I am wrong about but assume that I'm not, some leaders don't want to save certain members of their population.

“A natural hazard is a good way to just say 'ignore them, let whatever happen, happen' and carry on with the way they want to run their own government without those people.”

She said an example of this was when Cyclone Nargis struck Myanmar in 2008: “The generals in charge refused international assistance, and then we had the situation where the international community doesn't have a mechanism to provide assistance. There's nothing you can do if a country says no. It becomes a diplomatic issue because you know that they need it but they refuse to take it.

“My issue is responsibility. A state has first order duty to provide for the needs of its citizens, but if a state can't, then the rest of humanity does have this responsibility. So if a state isn't offering these life-saving and life-sustaining mechanisms of support then it has to be elevated to the international community.

“My research says we need to prepare and we need a mechanism for response. If we don't have these things then we are being unethical.”

Dr Traczykowski says a plan needs to be put in place: “Then, if a government can't or won't provide assistance I argue that the plan should adhere to a 'just war'-type set of criteria for deciding when or if intervening is just and therefore ethical.

Dr Traczykowski said that unfortunately, the International Law Commission, established by the UN in 1947, has decided against putting any such plan in place.

“We already know that interventions will occur in the aftermath of humanitarian emergencies, genocide, but I ask why not natural hazard environments? The big issue for me is that the political will is not behind the initiative.

“Sadly, I think persuading the international community will take another large-scale natural hazard where a government is either unable or unwilling to respond. All I'm asking for is that we think about the preparedness ahead of time, so I will petition at international forums through disaster ethics and academic channels.”

Germany without its stalwart former leader Angela Merkel faces a number of huge challenges – not least the threat of Russia invading Ukraine.