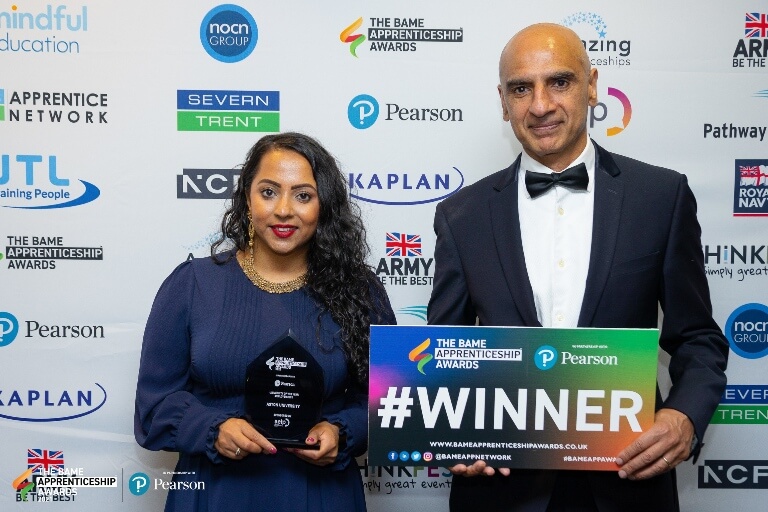 Aston University has picked up the inaugural University of the Year award at the BAME Apprenticeship Awards.

Organised by the BAME Apprentice Network, the awards aim to showcase the range of talent and hard work within the Black, Asian and minority ethnic communities, made possible with the contribution of employers and learning providers.

There is currently an under-representation of Black, Asian and minority ethnic community apprentices across all levels. The BAME Apprenticeship Awards aim to highlight the importance of apprenticeships and to put a spotlight on exceptional talent and employers who are committed to creating an inclusive environment where people of all ethnicities can make a valuable contribution, have a sense of belonging and flourish.

This was the first year the University of the Year category was awarded. Aston University was praised for its important work and contribution to the Black, Asian and Minority ethnic communities.

Aston University has a diverse population, with 74% of the student body having a Black, Asian or South-East Asian background. This is higher than the sector average, and it is a direct result of planned student recruitment and outreach activity at local schools and colleges that have also have diverse populations. Aston University is committed to both race and gender equality and in 2019, signed the Race Equality Charter.

Mark Smith, executive director of business engagement at Aston University said: “We were thrilled to pick up this award, especially so in its inaugural year. Aston University is proud to have a diverse student body, and to reflect this diversity in its apprenticeship provision – traditionally an area in which Black, Asian and other learners from minority ethnic communities are under-represented. The award reflects the commitment of the companies we work with to deliver apprenticeships to establish an inclusive workforce, so I’d like to express my gratitude to them for helping us receive this accolade.”

The event, held on 30 September in Birmingham, was attended by a large number of employers including British Army, Royal Navy and RAF, Lloyds Banking Group, Virgin Media, Severn Trent and EY. The evening showcased the depth and breadth of apprenticeship opportunities available to learners and diverse people that strive through opportunity.

Kasim Choudhry, managing director of the BAME Apprentice Network, said: “The team has worked really hard this year to make this event happen and we are so happy that people have finally been able to come together to celebrate apprenticeships.”