Aston University unveils its own autonomous vehicle for research, teaching and preparing for the future 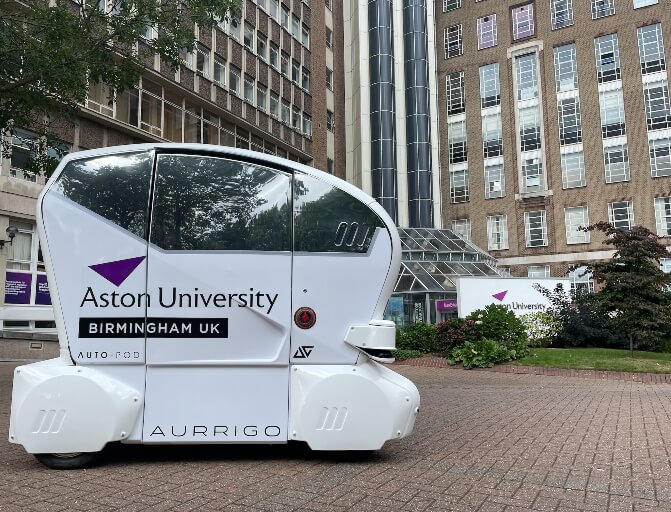 •  The launch of ‘Auto-Pod’ coincides with Birmingham Tech Week 11 to 15 October.

A state-of-the-art autonomous vehicle, called the Auto-Pod, has been launched at Aston University this week to coincide with Birmingham Tech Week.

The autonomous vehicle, funded by the Greater Birmingham and Solihull Local Enterprise Partnership and Institute of Technology, will be able to operate itself and perform a number of functions in and around the campus through its ability to sense its surroundings and will enable students to learn more about the future of travel through technology.

The Auto-Pod is believed to be the first autonomous vehicle purchased by a university in Birmingham and will be used for research and teaching purposes by the Aston Institute for Urban Technologies and the Environment (ASTUTE) within the College of Engineering and Physical Sciences.

The driverless pod, which was developed, designed and built by Coventry-based Aurrigo, will be used on campus as part of research into providing higher levels of safety in operating autonomous vehicles, replacing high-cost detection systems and delivering new low-speed autonomous transport systems.

David Webb, professor of photonics and director of ASTUTE, said: “We met with Aurrigo a few years ago and thought at the time how brilliant it would be to have one on campus as an educational tool to inform the public and students about the driverless technology that is on its way.

“It is an excellent teaching tool, and we couldn’t think of a better way to help our students plan for the future of vehicles. It is also going to be a great research tool, allowing us to look at a wide range of contributing technologies, from AI to mechanical engineering and the sensors on the device.

Professor Webb said they were excited to unveil the vehicle.

“We are thrilled to have it on campus; it really does draw a lot of attention from anyone walking past. We are excited to explore the potential it has for our academics and students, as well as informing the general public and regional companies about the potential of autonomous vehicles.”

Miles Garner, sales and marketing director for Aurrigo, was delighted with the strategic relationship his company has with Aston University.

“We have been talking to the university for a number of years now and have also benefitted from several Aston University interns, so it is great to take this partnership further.

“We have autonomous vehicles around the world, but this is a first for Birmingham. We are currently helping build a map of the campus with our engineers, so that ‘Auto-Pod’ knows the best route to take and then it will be programmed to go out on its own.

“It’s great to see such interest in the vehicle on campus and we cannot wait to meet the engineers of the future, who will be working with it,” he added.

For more details about the research at ASTUTE, visit this link.

More details on Aurrigo can be found at www.aurrigo.com or by following @aurrigotech on twitter

Founded in 1895 and a University since 1966, Aston is a long-established university led by its three main beneficiaries – students, business and the professions, and our region and society. Aston University is located in Birmingham and at the heart of a vibrant city and the campus houses all the University’s academic, social and accommodation facilities for our students. Professor Alec Cameron is the Vice-Chancellor & Chief Executive.

Aurrigo is leading the world in how we use driverless technology to change the way we transport people/cargo on the last stage of their journey, whether that is for city centres, university campuses, shopping centres or airports.

Leveraging funding from Innovate UK and academic support, the company have created pods and shuttles that have been involved in ground-breaking trials in Milton Keynes, Cambridge, Elliot Gardens retirement scheme in Australia, the Wales Open at Celtic Manor and at the Blind Veterans UK HQ in Brighton.

Over the last twelve months, the firm has also launched Auto-Dolly, the world’s first ever autonomous luggage dolly for carrying cargo and luggage around airports.