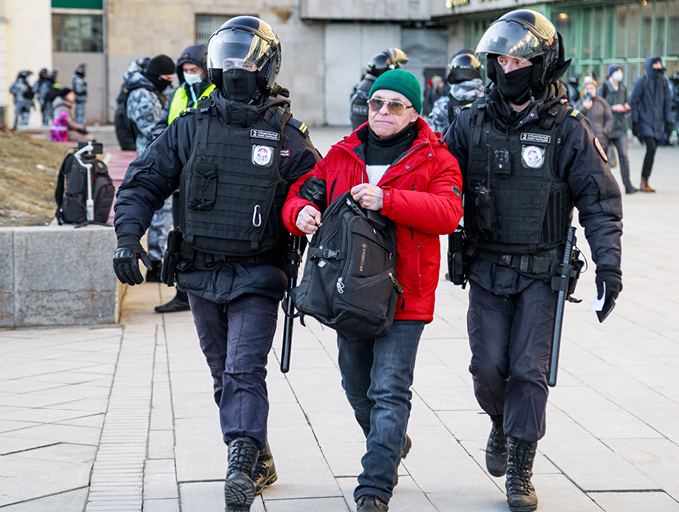 Ernest A Reid, an assistant lecturer whose PhD is focused on the protests in the former Soviet Union, says that blocking and banning of Western media outlets, together with an increasing number of mass detentions and tougher new penalties, indicate that Putin’s regime seems to be moving in the autocratic direction.

He discusses the ongoing situation in Russia in the latest episode of the 'Society matters' podcast series, presented by journalist Steve Dyson.

Mr Reid, who was born in Russia and still has relatives living there and in Ukraine, explained that in recent years YouTube had “crystalised” as a counter-public sphere in contrast to state-aligned television, “breathing new life into Russia’s protest movement”.

He said this was apparent in 2017 when a film about the then Russian prime minister’s alleged corruption schemes was published on the YouTube channel of anti-regime activist Alexei Navalny.

Mr Reid, who moved to the UK from St Petersburg at the age of 12 was planning to travel to Russia on a research/ethnography trip around May or June this year. However, these plans have now been cancelled due to the invasion of Ukraine. It has also left him personally affected as he has relatives living in different parts of Ukraine.

He is still hoping to interview anti-war protesters in Russia as part of his sociology PhD but admitted: “It has been difficult to concentrate these past few weeks. They [my relatives] are feeling tense but still going about their everyday business, but they do have somewhere to hide in case the fighting reaches them.”

Mr Reid’s research was originally focused on last year’s ‘Free Navalny’ campaign in reaction to his arrest and a subsequent YouTube film about ‘Putin’s palace’ and his alleged corruption schemes.

He said: “These anti-war protests, however, are different in the sense that they are more spontaneous.”

And, unlike previous protests in recent years, he said Navalny’s “persona” is not really essential anymore.

Mr Reid explained that the current anti-war demonstrations have also proved to be more sustainable as there have been protests every day.

He said: “Corruption has been one of the top concerns in Russia for a long time, but since the 24th of February when Putin made his announcement, it took a back seat.”

Russia's response, he said, had been an increase in the number of people detained, both in number and as a proportion of the protestors. At the height of the Free Navalny protests, more than 10,000 people came onto the streets on 21 April last year but under 2,000 were detained, whereas on 6 March this year almost 5,000 of 5,200 protesters were arrested.

Mr Reid said such a “huge difference” shows the Russian authorities are no longer willing to tolerate some dissent and means that “now the stakes are very high”.

At the same time, Russia had introduced a new law of spreading knowingly false information regarding the armed forces, which may result in a fine of up to five million roubles (almost £35,000), or up to five years’ penal labour, or 15 years’ incarceration.

He said: “It’s fear that they want, essentially.”

Russian propaganda had not prepared “the masses” that well before the invasion, hence many Russians are still “trying to figure things out” and “how to feel about it”. As to future protests, he said the mass detentions had been “overwhelming”, leading him to believe that law enforcement’s task is to scare rather than anger dissenters.

He said: “You have to remember as well that a lot of the Western mass media outlets and social media platforms have been blocked or banned in Russia, like Instagram and others, so the Russian regime is increasing its influence in the information space. And if the remaining opposing voices in the still surviving, YouTube and Telegram, are unable to generate enough anger and capitalise on it, the momentum will be lost.”

The picture, with Putin’s regime becoming more autocratic, is a depressing one, he concluded: “To be honest, I just want this whole nightmare to end and be able to see my Ukrainian friends and relatives alive. That is all I ask for.”

Founded in 1895 and a University since 1966, Aston is a long established university led by its three main beneficiaries – students, business and the professions, and our region and society. Aston University is located in Birmingham and at the heart of a vibrant city and the campus houses all the university’s academic, social and accommodation facilities for our students. Saskia Hansen is the Vice-Chancellor & Chief Executive.