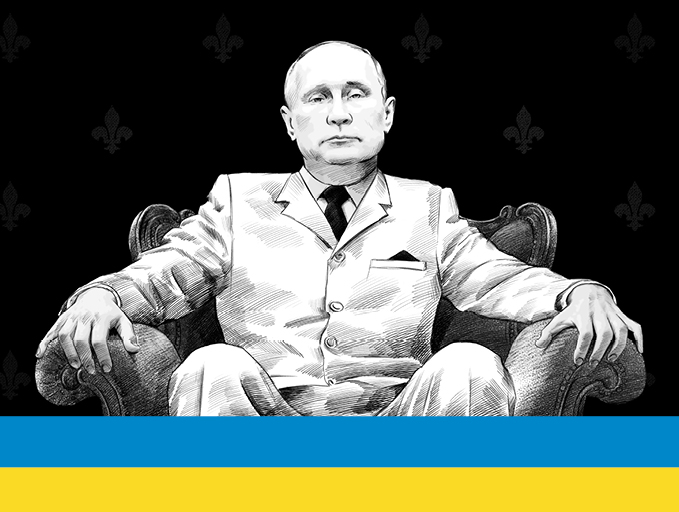 There is now even speculation that only a “heart attack-style” assassination of the dictator by his senior military and secret services could prevent Putin from seeking to expand his borders even further.

These themes were discussed by Dr Elisabeth Schimpfössl, a senior lecturer in sociology and policy at Aston University, and author of the award-winning book Rich Russians: From Oligarchs to Bourgeoisie.

Dr Schimpfössl, speaking about the ongoing Russian invasion of Ukraine as part of the 'Society matters' podcast series, presented by journalist Steve Dyson, explained there were two reasons why Putin had decided to invade its neighbour.

She considered two potential reasons behind the invasion: “The first is he has always had ambitions to incorporate eastern Ukraine and, particularly, keep NATO at bay and not have it anywhere so close to Russia’s own borders. The second thought is whether Putin might have simply lost it, in a clinical sense.”

Dr Schimpfössl said Putin had been “extremely isolated” during the pandemic, with very few people allowed to see him in his “bunker”.

She added: “It might well be, as bizarre as it sounds and unimaginable as it might be, that he is losing it and courting advice from people who have such fear of him that they would say what he wanted to hear.”

While such madness is currently pure speculation, Dr Schimpfössl explained how people close to him would potentially “fear for their lives” if they contradicted him or alerted him to what a “crazy idea” war was. She said Russian Foreign Minister Sergey Lavrov, whose daughter lives in New York, had wanted to retire “years ago” but Putin would not let him.

And she mentioned claims that the former head of Russia’s foreign secret service died from an apparent heart attack after he “pretty much messed up” the poisoning of double agent Sergei Skripal in Salisbury in 2018.

She said: “It’s pretty obvious that similar fears were deep in the bones of all the closest entourage of Putin. They all know pretty well how the system works.”

Dr Schimpfössl described reports on how opposition activists and investigative journalists “suddenly, suspiciously, jump off their balcony to their death. And they threaten people that if they don’t jump then their family will suffer”.

She suggested that Russia’s billionaire oligarchs could have taken measures if they had seen what was coming. However, the European Union had now added oligarchs onto the sanctions list for the first time after being deeming them “Putin’s cronies” instead of business leaders.

Dr Schimpfössl said: “Until Friday, Putin’s plan was to succeed within maybe a week and sanctions would have become effective in weeks, or months from now. Now things have changed and the EU sanctions have gone a big step further on.”

She said it will be a “catastrophe” for Russia’s oligarchs now they are subject to sanctions. The only thing that could “save their skin”, she added, is if they create an image of being “anti-war, anti-Putin”. But would this help stop Putin?

“Not if he’s completely gone bonkers, then nothing will stop him,” Dr Schimpfössl again speculated. “It makes him extremely dangerous in terms of his announcement of using nuclear weapons. It would be the maddest possible thing to do, but there is no guarantee anymore.”

The only thing that could stop him, she hypothesised, was if Putin suffered the similar fate of a “sudden heart attack” following a “silent coup” by Russia’s top military and secret services, although it is pure conjecture that any such actions are being planned.

Opinion polls in Russia suggest that only 40 per cent of the population support the action against Ukraine, compared to 80 per cent over the annexation of Crimea in 2014.

Dr Schimpfössl said she hoped negotiations between Russia and Ukraine would lead to an agreement, but added: “We know from history when an aggressor sees itself being on the losing end, or things not go according to plan, they often lash out at the very last moment. Any escalation of the conflict could easily and very quickly get very cruel and barbaric.”

Founded in 1895 and a University since 1966, Aston is a long established university led by its three main beneficiaries – students, business and the professions, and our region and society. Aston University is located in Birmingham and at the heart of a vibrant city and the campus houses all the university’s academic, social and accommodation facilities for our students. Saskia Hansen is the Vice-Chancellor & Chief Executive.