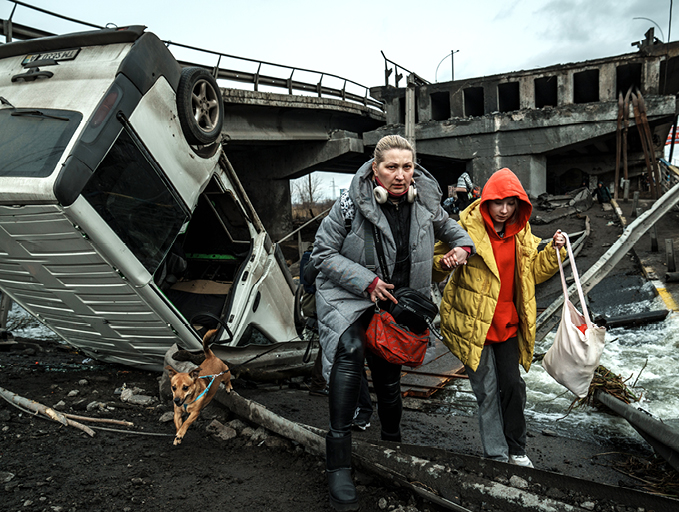 The academic, who was born and educated in Russia, was discussing the war in the latest episode of the ‘Society matters’ podcast series, presented by journalist Steve Dyson.

He said that for all Russians “our lives changed forever” on the day that Ukraine was invaded on 24 February and that it was now a “completely different world”.

Dr Popov, who remains a Russian citizen and has extended family and friends in the country, explained that he “felt anger during the first days of this war, and shame, perhaps experienced by many Russians” who see their army “perpetrating war crimes”. He was also experiencing worry and fear over what was going to happen to his country.

He said that “back in Russia, I can see how this war is polarising society”, an “almost unbreachable” split between people opposed to the conflict and those supporting Putin’s regime. Meanwhile, he pointed out that people in Russia were already experiencing empty shelves in shops and supermarkets, and there was a “very significant emigration” of Russians to other countries.

“I’m afraid Russia is sinking into a very dark place, and I cannot see any good ending … The possible best-case scenario in these gloomy outcomes is it isn’t going to be over in a few weeks, or even a few months, it’s going to last for several years and Russia will find itself something between North Korea and Iran.”

He added that the Russian economy would be severely damaged as a result of sanctions while, politically, there could be increased repression and the “emergence of something resembling a military dictatorship”.

Dr Popov said “the ‘bad' scenario” was that the situation in Russia continues to decline and “everything collapses, the economy, social structure", resulting in more widespread protests. And with no political way to change the ruling regime and channel their frustration “this might lead to civil war” resulting in a rise in refugees and violence.

He warned: “But even this is not the worse [scenario] as no-one can dismiss the nuclear threat.”

Asked how President Putin has maintained support from the majority of Russia’s population, Dr Popov replied: “Very effective propaganda and brainwashing of the population through media channels.”

However, he said: “I think the lack of military success in Ukraine, the number of casualties which at the moment are hidden from the population by the Kremlin, they will become known to the wider population and this will be sobering.”

A lot of people in Russia, he explained, were “currently in denial of this wrong war” but will eventually see the “falsification”, which could result in “social unrest and civil war”, as many Russians might also feel they are “in a besieged fortress”.

Dr Popov said that Putin began his path to power against the backdrop of the first Chechnya war in the mid-1990s. That war stopped due to it being very unpopular, but he said: “The threshold of accepted violence was significantly lowered in society, [which] led to society being easily seduced by the narrative of the violent solution to some problems.”

It also resulted in Putin’s “very arrogant terms” about Russia getting up off its knees, his nostalgic references to the Soviet Union, attempts to “rehabilitate Stalinism”, and positive references to the old Russian empire and imperialism.

At the same time, he said there had been an increase in “very intolerant language expressed in dehumanising terms" towards ethnic minorities and minorities in general, both in everyday conversation and official statements.

He said despite Putin’s efforts to justify the war by “liberating” Russian-speaking Ukrainians, they had not welcomed his troops with “bread and salt and flowers” but saw them as occupiers and were fighting on the frontline.

Dr Popov concluded that Putin had been allowed to “hijack” Russian culture, so what now needed to be done was to “de-couple” his regime from the country’s culture to show that Russia “is not just Putin”.

He added that it was also time to “stop talking about the post-Soviet Union”, given it had collapsed some 30 years ago, and that one positive about the Ukraine war was the chance to create new identities for Russia and the Russian people.