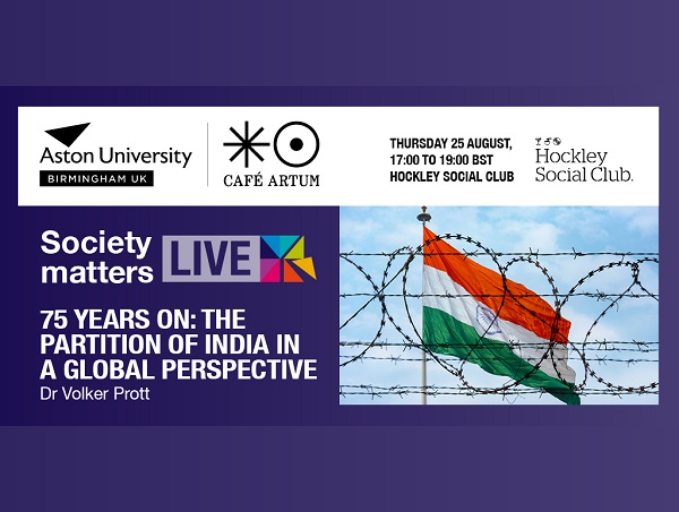 75 Years On: The Partition of India in a Global Perspective will take place at Café Artum in Hockley Social Club on Thursday 25 August from 1700 to 1900 hrs.

The event on 25 August is the second in the series of Society matters LIVE.

The British decision in June 1947 to grant independence to its colony by creating two separate states caused the displacement of over ten million people as well as hundreds of thousands of casualties.

In this talk, the second of Aston University’s ‘Society matters LIVE’ series, Dr Volker Prott will invite attendees to take a step back and explore the partition of India from a global historical perspective. Why did partition seem inevitable to so many people 75 years ago, even if they saw trouble ahead? Where does the idea of partition even come from? Why did so many partitions occur in the twentieth century and in the context of decolonisation?

“The partition of India has become a synonym of tragedy and unimaginable human suffering.

“Partition is also now seen by many as a massive diplomatic failure, giving rise to the Indo-Pakistani conflict, one of the most bitter and long-lasting territorial disputes since the end of the Second World War.

“We will consider other partition examples, such as Ireland, Palestine, India, and also Germany, Korea, and Vietnam in order to tease out the concept of it and understand what it means in different contexts.

“And of course, we will pay attention to the partition, discussing its many facets, and taking the time to explore ways to overcome its divisive legacy.”

You can sign up to the free event here.

You can listen to the latest podcast episode of ‘Society matters’ with Dr Volker Prott, who speaks about the legacy of India and Pakistan’s independence with journalist Steve Dyson, here.

You can find out more about how Aston University’s history department is marking 75 years since Indian partition here.

For more information about studying history at Aston University visit our website.