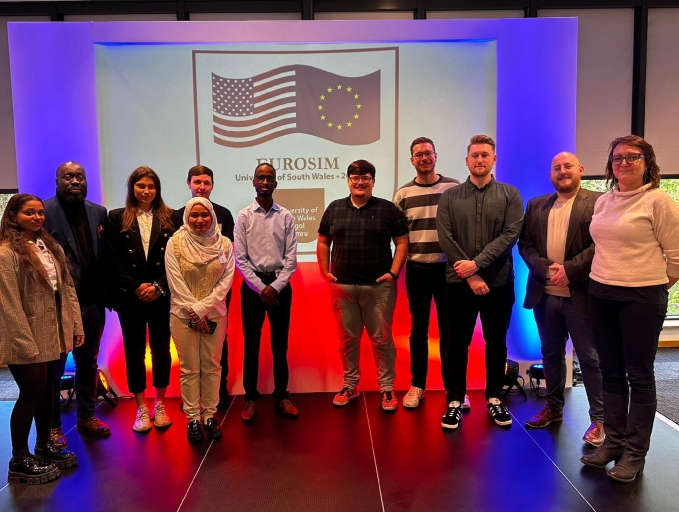 Aston University’s EuroSim team has returned from this year’s event with two awards.

The Aston EuroSim Team was awarded best debater in the European Parliament Committee on Employment and Social Affairs (EMPL) and best in special roles (media/journalist).

The purpose of this module is to educate students about the inner workings of the European Union in order to enhance the learning experience for students.

This year it was hosted by the University of South Wales in Newport, the first time the event has been held in the UK.

Dr Patrycja Rozbicka, a senior lecturer in politics and international relations who is the lead for Aston EuroSim and was European associate director for EuroSim experience (2019-2023), said:

“Here at Aston University, the EuroSim module is one of the most innovative modules of the Aston Politics and International Relations Department’s undergraduate and MA programmes.

“I would like to extend my gratitude to my team from Aston University, and special mentions to my lecturer Dr Patrycja Rozbicka and student director Chris Burden for organising and inviting us to this memorable trip.

“Representing Max Orville (my alter ego), MEP and Renew Europe Group, I worked together with my party and committee members with shared interests and values to ensure that no one is left behind by the proposed Social Climate Fund, which has recently been approved in real life.

“After three days packed with negotiations and meetings, we are pleased that the Social Climate Fund has been approved and we strongly believe that it will support vulnerable people, households, micro-enterprises and transport users at risk of facing higher costs as the bloc introduces new climate measures.”

“I had the greatest honour attending the EuroSim2023 meeting at the ICC Wales as the European student director and part of Team Aston.

“The work that goes into this conference is unbelievable, and the students had a fantastic time debating and simulating questions surrounding social and climate action within Europe.

“This Transatlantic conference is the highlight of any year.

“Thank you to our fantastic team from Aston University who brought home the two awards for their efforts.”

The next EuroSim will be held next year in Brockport, northern New York State, USA.

If you want to read more about the Aston EuroSim, click here.

Be first to get the latest news, research and expert comment from Astonby following us on Twitter