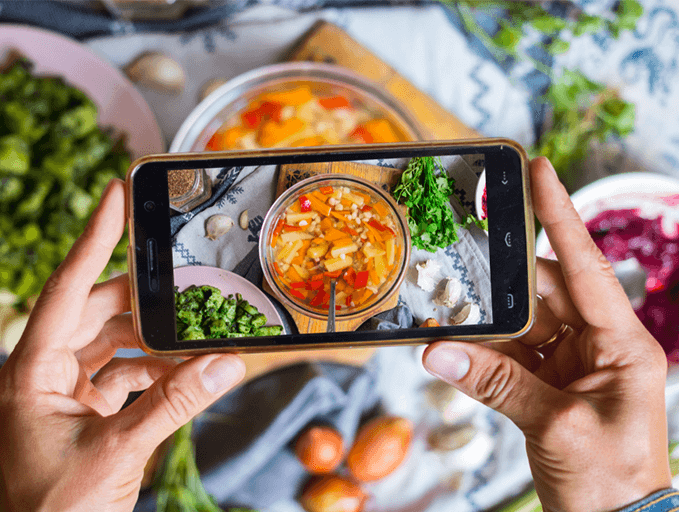 Social media users who view images of healthy foods that have been heavily endorsed with ‘likes’ are more likely to make healthier food choices, a new study has found.

The research, by psychologists from Aston University’s College of Health and Life Sciences, found that study participants who viewed highly liked mock Instagram posts of fruit and vegetables ate a significantly higher proportion of grapes than cookies, with consumption of grapes increasing by 14 per cent more calories, compared to those who viewed highly liked high calorie foods.

The study, which is published in the scientific journal Appetite, investigated the acute effect of socially endorsed social media posts on participants’ eating behaviour. The 169  participants, who had an average age of 21 years old (but total ages across the group ranged from 18 to 48), were asked to look at mock Instagram posts of different types of food, that either had a few or a lot of ‘likes’, and later given access to grapes and cookies to consume.

As well as viewing images of fruit and vegetables, participants also looked at less nutritious foods such as cakes and biscuits, and non-food images such as stylish interior designs. However, the researchers found that the participants went on to consume a larger proportion of grapes after viewing highly liked images of fruit and vegetables, compared to the other images.

“The findings of the study suggest that not only exposure to healthy food images on social media, but those that are also heavily endorsed with ‘likes’, may nudge people to choose to eat more healthy foods, in place of less nutritious foods.”

“What we see others approve of eating and post about eating on social media can affect our actual eating behaviour and could result in a greater consumption of healthier meals and snacks.”

“One reason for this may be because thinking that others ‘like’ and eat fruit and vegetables nudges participants to alter their behaviour in order to fit in with what they perceive to be the norm.”

The most recent figures from the NHS’s Health Survey for England showed that in 2018 only 28 per cent of adults were eating the recommended five portions of fruit and vegetables per day. In Wales, this was 24 per cent, in Scotland 22 per cent and in Northern Ireland around 20 per cent. Children and young people across the UK had even lower levels of fruit and vegetable consumption.

The study findings suggest that social media could be used in future as a way to encourage healthier eating - by encouraging users to follow more social media accounts which have highly liked nutritionally balanced posts, also containing healthier foods.

The researchers said the next stage of their work will trial an intervention using real Instagram accounts, to test whether asking people to actively follow more social media accounts posting images of highly liked nutritionally rich foods, can encourage people to consume more fruit and vegetables over a sustained period of time.

“We know that social interactions can strongly shape what, when and how much we eat. These findings highlight the important role that social media has in shaping those influences online.”

“The findings suggest that people do not simply passively view information about what other people are eating online, but that this digital information can shape our food preferences and choices, particularly when we think lots of other people like certain foods. It is promising that exposure to healthy foods, and likes of those foods, was related to greater intake of healthy foods.”

“Further research is needed to explore whether and how these findings can be translated into digital interventions to help support individuals who want to make healthier food choices, and to understand how social media platforms can be used as a tool to support healthy eating behaviour.”

For more information about studying psychology at Aston University, please visit the College of Health and Life Sciences and the psychology course pages.

Be first to get the latest news, research and expert comment from Astonby following us on Twitter