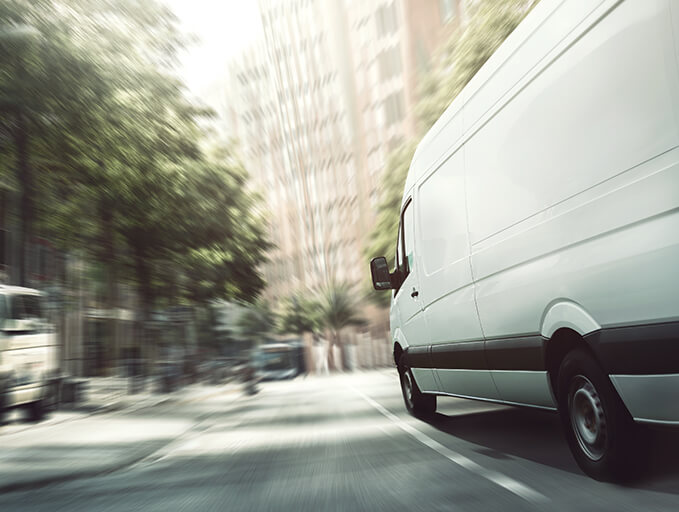 Fleets of commercial vehicles that operate in large towns and cities could halve their emissions and better meet clean air targets using a new technology developed by Aston University researchers, which imitates how ants share knowledge, scaling them up to real world problems - such as optimising routes around busy cities.

The software, which has been developed and tested by computer scientists in the College of Engineering and Physical Sciences at Aston University, in Birmingham, under the Think Beyond Data initiative, part-funded by the European Regional Development Fund) (ERDF); uses a method called ‘route optimisation’ to intelligently direct fleets of vehicles from the same company around a city or town - slashing their vehicle emissions in half - whilst also saving them time and fuel costs.

The researchers based their computer modelling algorithm on the way ants forage for food to schedule tasks to vehicles in a fleet and optimise their routes. The software can be installed on a laptop and business owners can then use the system to optimise their own routes based on their daily needs.

The ability to optimise routes of fleets of commercial vehicles is significant because it will enable cities and towns to move towards addressing their clean air targets and offer an alternative measure to establishing Clean Air Zones.

And, with an unprecedented global demand for home deliveries, due to Covid-19, the number of deliveries being made daily by drivers has surged, resulting in an increase in fleets of vehicles on our roads. For example, Essentialretail.com said The Royal Mail reported that 45% of adults in the UK were now receiving more parcel deliveries, while the BBC reported that 3.5 million vegetable boxes were delivered in two months during lockdown in the UK.

The research team used a technique known as ‘meta-heuristic technology’. The method mimics how colonies of ants solve problems and improves upon their existing behaviours. For example, each ant keeps a record of the best solution it has individually found and passes on this knowledge to other ants. This ‘best practice’ then permeates through-out the colony, updating its store of know-how in a way comparable to computer algorithms.

The researchers further developed the technique by creating even ‘smarter’ ant algorithms by reducing the amount of decisions they make such that they can solve city-scale fleet routing problems.

Dr Darren Chitty, lead researcher, Aston University said: “Algorithms based on the foraging behaviour of ants have long been used to solve vehicle routing problems, but now we have found how to scale these up to city-size fleets operating over several weeks in much less time than before.

“It means much larger fleet optimisation problems can be tackled within reasonable timescales using software a user can put on their laptop.”

The route optimisation technology was tested on several Birmingham companies that operate fleets of vehicles to help them minimise their road usage. For example, a company that operates within the Birmingham area performing external maintenance tasks at customers’ properties can spend a considerable part of their day criss-crossing the city’s road network, thus contributing to high levels of air pollution through their vehicle emissions and adding to congestion.

Tests with the maintenance company comprised of up to 45 vehicles and 437 customer jobs over a six-week period. They observed savings of over 50-per cent over the company’s original time spent on the road. This enabled the maintenance company to make equivalent savings in their fuel costs, boost profit margins, whilst cutting vehicle emissions in half.

Dr Chitty added: “We feel that while Clean Air Zones will improve air quality for some residents, there could be better ways to tackle the health and environmental problems caused by emissions. Instead of taxing commercial vehicles to enter these zones, our research can act as an incentive to companies as they will not only reduce emissions but also save money.

“If all companies in a city operated with this technology, then emissions from these vehicles - which are some of the most polluting - could be significantly reduced, improving air quality for all concerned”.

The improved schedules were able to service all the required customer demand but with fewer vehicles. This came as a direct result of better routing, saving time for the fleet, but also taking some vehicles off the road altogether, reducing traffic and congestion.

The researchers found the new system could be extremely beneficial to cities establishing Clean Air Zones in order to meet the objectives of the Government’s clean air strategy, which aims to cut particulate matter emissions by 46% by 2030.

This is significant amid growing public health concerns about the effects of air pollution on global populations. The World Health Organisation (WHO) recently stated that the level of dangerous particulates in the air of major cities are rising sharply, with particulates causing breathing problems in some young and elderly people, as well as being linked to increased rates of cardiovascular disease.

The researchers are now looking to roll out the technology further by testing the system with different types of vehicle fleets such as larger vans or HGVs, as well as larger fleets of vehicles. The team will continue to approach other companies to use as a testbed for the technology as the project is funded for another two years.