Podcast: Fans’ fury over European Super League was 30 years in the making 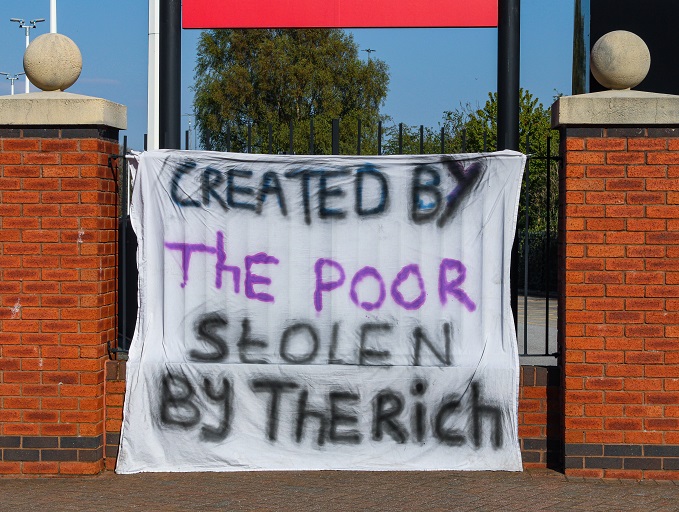 The recent pitch invasion by hundreds of Manchester United fans in protest at a proposed breakaway European league made headlines around the world.

But the seeds for the angry Old Trafford demonstration, which led to the match with Liverpool being postponed, were sown 30 years ago with the formation of the Premier League.

That’s one of the main findings of a fascinating new research study into the growth of football fan activism by Dr Danny Fitzpatrick, a lecturer in politics and international relations at Aston University.

Results of the study, carried out with in partnership with media lecturer Dr Paddy Hoey of Edge Hill University, are to be published next year in a special edition of football research journal Soccer & Society.

Dr Fitzpatrick, who is one of the UK’s experts on the politics of sport, spoke about his research in the latest episode of the 'Society matters' podcast series, presented by journalist Steve Dyson.

They described the ESL, which collapsed when the English clubs withdrew in the face of fans’ protests, as “disgusting” and “absolutely abhorrent”.

Dr Fitzpatrick said there was a “moral shock and revulsion” over the ESL which he described as a “quite blatant money grab” by the top clubs in Europe. And the English fans' outcry quickly made the ‘big six’ clubs realise that the proposed league was not going to be feasible and was also “awful PR”.

But Dr Fitzpatrick, co-founder of The Football Collective, comprising more than 300 academics and practitioners, said the fans’ reactions to the ESL “debacle” had built on the previous 30 years of football activism since the Premier League’s establishment in 1992.

He said: “Both were breakaway leagues which sought to increase the revenue of top clubs and weaken the ties of solidarity with the rest of the football pyramid.”

His research examines three distinct phases of fans’ activism, starting with the initial reactions against the Premier League then protests against Arsenal and West Ham’s proposed bond scheme.

Dr Fitzpatrick said the schemes were designed to help pay for all-seater stadia in the wake of the Hillsborough disaster, but the “resultant uproar” from fans was partly around the perceived exclusion of poorer and young fans.

The second phase came in the 2000s with two “huge club ownership” involving the “leveraged debt takeover” of Manchester United by the Glazer family and the “debt-laden” takeover of Liverpool. Dr Fitzpatrick said fans’ collective action became “much more sophisticated, much more networked and much more global in scope”.

The final phase covers the last five years which, Dr Fitzpatrick said, documents the emergence of a new type of fan activism – “through football rather than in football”.

This includes Liverpool and Everton fans uniting in 2015 to fight food poverty in the city through regular food collections on match days. And three female Celtic fans began a campaign in 2018, which later spread throughout Scotland and the UK, to get free period products at football grounds.

Meanwhile, supporters last year successfully campaigned against a proposed pay-per-view charge to watch matches during COVID-19 by urging fans to donate the £14.95 fee to local foodbanks instead.

Dr Fitzpatrick said supporters’ activism had been driven by the advent of the internet, fan forums and then social media, plus via advocacy organisations like the Football Supporters’ Association.

Another change was that fans were increasingly seen as the game’s “legitimate stakeholders”, while the notion of football club owners and directors as responsible custodians had “diminished”. Dr Fitzpatrick predicted that fan activism will increase, pointing to an ongoing, fan-led government review as evidence.