One of the crowd or one of a kind? New artificial intelligence research indicates we're a bit of both 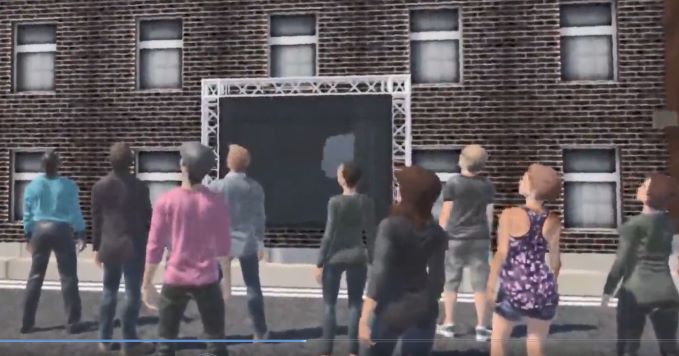 An Aston University computer scientist has used artificial intelligence (AI) to show that we are not as individual as we may like to think.

In the late 1960s, famous psychologist Stanley Milgram demonstrated that if a person sees a crowd looking in one direction, they’re likely to follow their gaze.

Now, Dr Ulysses Bernardet in the Computer Science Research Group at Aston University , collaborating with experts from Belgium and Germany, has found evidence that our actions follow a two-step process when we’re in a crowd.

Their results, Evidence for a two-step model of social group influence, published in iScience show that we go through a two-stage process, where we’re more likely to imitate a crowd first and think independently second.

The researchers believe their findings will increase the understanding of how humans make decisions based on what others are doing.

To test this idea the academics created an immersive virtual reality (VR) experiment set in a simulated city street.

Each of the 160 participants was observed individually as they watched a movie within the virtual reality environment that had been created for the experiment.

As they watched the movie, 10 computer-generated ‘spectators’ within the VR simulated street were operated by AI to attempt to influence the direction of the gaze of the individual participants.

During the experiment, three different sounds such as an explosion were played coming from either the left or right of the virtual street. At the same time, a number of the ‘spectators’ looked in a specific direction, not always in the direction of the virtual blast or the other two sounds.

The academics calculated a direct, and an indirect, measure of gaze-following.

The direct measure was the proportion of trials in which participants followed the gaze of the crowd.

The indirect measure took into account the reaction speed of participants dependent on whether they were instructed to look in the same or opposite direction as the audience.

The experiment’s results support the understanding that the influence of a crowd is best explained by a two-step model.

Dr Bernardet, said: “Humans demonstrate an initial tendence to follow others – a reflexive, imitative process. But this is followed by a more deliberate, strategic processes when a person will decide whether to copy others around them, or not.

“One way in which groups affect individuals is by steering their gaze.

“This influence is not only felt in the form of social norms but also impacts immediate actions and lies at the heart of group behaviours such as rioting and mass panic.

“Our model is not only consistent with evidence gained using brain imaging, but also with recent evidence that gaze following is the manifestation of a complex interplay between basic attentional and advanced social processes.”

The researchers believe their experiments will pave the way for increased use of VR and AI in behavioural sciences.

Founded in 1895 and a university since 1966, Aston University is a long-established university led by its three main beneficiary groups – students, business and the professions, and the West Midlands region and wider society. Located in Birmingham at the heart of a vibrant city, the campus houses all the University’s academic, social and accommodation facilities for our students. Professor Aleks Subic is the Vice-Chancellor & Chief Executive.

Aston University is ranked 22 in the Guardian University Guide, based on measures including entry standards, student satisfaction, research quality and graduate prospects. The Aston Business School MBA programme was ranked in the top 100 in the world in the Economist MBA 2021 ranking.

For media inquiries in relation to this release, contact Nicola Jones, Press and Communications Manager, on (+44) 7825 342091 or email: n.jones6@aston.ac.uk

Leading authority on system and simulation modelling to share insights into new approaches to engineering complex software systems during the next in the series of online public lectures from Aston University on Tuesday, 27 April 2021.

Aston University has been recognised as sector leaders in knowledge transfer partnerships (KTPs) in this year’s KTP Best of the Best Awards.

Graduates of Aston University are among the highest paid in the country five years after graduating according to new data released by the Department for Education.