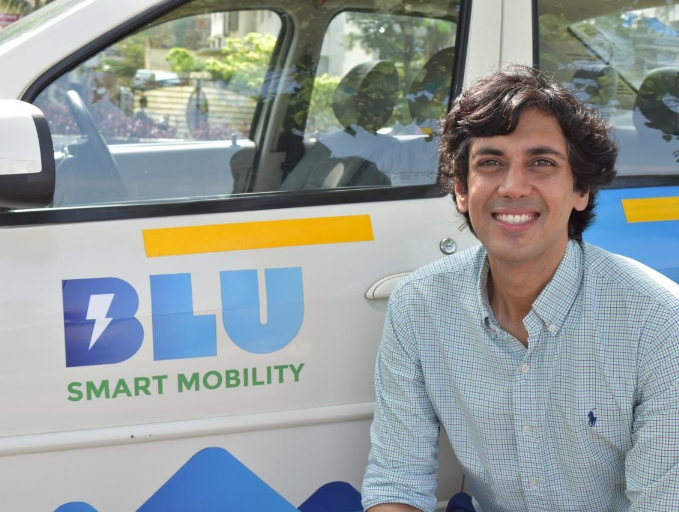 The co-founder of India’s first 100% electric ridehailing service, BluSmart, is to receive an honorary doctorate from Aston University.

In 2006 Punit Goyal left India to study for a MSc in International Business at Aston University, after which he went on to launch a succession of successful businesses in India within the sustainable energy sector. He built them from the ground up and sold each business before moving on to his next venture.

Previous businesses include PLG Power which was founded to manufacture solar panels for export to Europe, which achieved annual sales of $100million between 2008 to 2011. He also created solar power company PLG Photovoltaic which built India’s first 20 megawatt solar power plant which he sold in 2014 for $70million.

In 2019, he set up BluSmart to help tackle two of India’s biggest problems - massive traffic congestion and high levels of air pollution. BluSmart currently operates across the Delhi  region and has completed 1.8 million zero-emission trips, covering 60 million ‘clean’ kilometres. By July 2022 the company is projected to reach $24million in annual revenue run-rate from subscriptions, and has raised $65mln in venture capital since launch and is backed by BP Ventures (London).

On hearing he is to be awarded an honorary doctorate from his former university he said: “I originally wanted to study abroad to help me grow my global network and at Aston University I achieved this, working with a diverse cohort picking up business practices from different cultures. I wrote a dissertation in 2007 called the ‘Role of Renewable Energy in Powering India’s Future’ with a focus on solar power, and it’s my research and the time I spent at the Aston University campus, that gave me the confidence to launch my entrepreneurial ventures in the renewable energy space.

“I’m delighted to be the recipient of an honorary doctorate from the prestigious Aston University - which gave me the platform to pursue my goals and to become a clean energy entrepreneur”.

Professor George Feiger, executive dean of the College of Business and Social Sciences, said: “It is a pleasure to invite Punit back to Birmingham to receive an honorary doctorate.

“He originally chose to study for a MSc in International Business at Aston University because he wanted to enhance his entrepreneurial effectiveness – something he has most definitely achieved.

“His career is an inspiration to anyone aiming to be an entrepreneur. Not only has he built up several hugely successful businesses, he is now using his commercial acumen to help tackle pollution in India.”

Aston University will be holding its summer 2022 graduation ceremonies between 18-22 July.