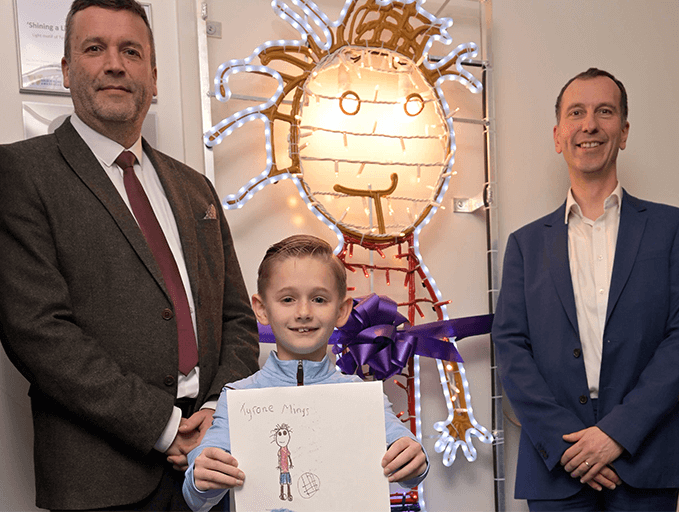 A light sculpture named after the Aston Villa footballer Tyrone Mings has been unveiled at Aston University as part of a campaign to help raise awareness of colour blindness.

In the UK there are approximately 3 million colour blind people (about 4.5% of the entire population), most of whom are male. Worldwide, there are estimated to be about 300 million people with colour blindness.

The competition, ‘Shining a Light on Colour Blindness’, was launched by non-profit organisation Colour Blind Awareness and supported by various football club charities - including the Aston Villa Foundation. Young supporters were asked to take part by drawing a colourful picture of their favourite footballer. The winning entry was then made into a light feature.

Colour Blind Awareness is a non-profit organisation designed to highlight the relevance and impact of colour vision deficiency amongst those that live with it - including the challenges in sport. The organisation is part of an EU-funded project, Tackling Colour Blindness in Sport.

Professor Hilton said: “We are delighted for Leo, his winning drawing of Tyrone Mings looks fantastic as a light sculpture and we are proud to host it in our Vision Sciences building for our students, staff and visitors to enjoy, whilst raising awareness about colour blindness.”

Commenting on his winning drawing, Leo said: “I am very proud that my picture won the competition and that Tyrone Mings liked it. I now better understand what being colour blind means and I hope my picture has helped someone else.”

Cheryl Evans, Leo's Mum, said: “I couldn't be prouder of Leo and the fact that his drawing is of his favourite player Tyrone Mings makes it even more special. This competition has meant that as a family we have had many conversations about colour blindness and it has educated us all more on this topic. Well done Leo!”

Kathryn Albany-Ward, CEO at Colour Blind Awareness CIC, said: “Aston Villa Foundation’s entry from Leo charmed the judges and who were delighted to award it first prize. We’re very grateful to Aston University for hosting the light feature and can’t wait to see it displayed. We hope its location in the Vision Sciences Department will help raise more awareness of a condition which affects 8% of boys and 0.5% of girls worldwide, impacting on their education and ability to perform to their best in sport if left unsupported.”

Leo was met and congratulated by the head of the Aston Villa Foundation, Guy Rippon, and foundation manager, Ross Alexander.

Ross said: “The Aston Villa Foundation would like to say a big congratulations to Leo for his amazing achievement! This is a really proud moment for Leo and we are thrilled that he was inspired by his favourite Aston Villa player.

“It has also been a pleasure to have supported Colour Blind Awareness, who have done some great work in highlighting such an important and relevant topic during our coaching team’s workforce development. The support has culminated in a competition that was won by Leo, a participant in one of our Football in the Community holiday sessions.

“The stunning light feature of Tyrone Mings will now be housed at Aston University for all to see and we are grateful for the University’s ongoing support with the Club.”