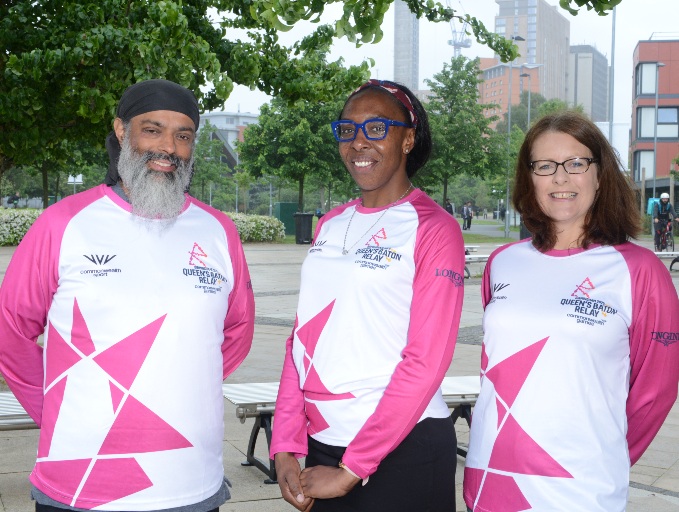 The Birmingham 2022 Commonwealth Games has confirmed the thousands of inspirational people from communities across England who will ‘take it on’ as the role of Batonbearers in the Queen’s Baton Relay this summer.

Dr Angela Jeffery, Gurpal Singh Rai, Balraj Purewal and Camiquea Bryce are amongst those from Aston University who have made it onto the list of over 2,000 specially nominated community heroes.

During its tour of Commonwealth nations and territories, the Queen’s Baton arrived back in England on 2 June for a four-day visit to London, coinciding with The Queen’s Platinum Jubilee Central Weekend, before resuming the international journey.

It later returned to England on 4 July to commence a 25-day tour across all remaining regions.

The Relay will culminate at the Alexander Stadium on 28 July for the Opening Ceremony, where the Queen’s message will be read aloud, signifying the official start of the Birmingham 2022 Commonwealth Games.

“I am looking forward to taking part in the build up to the Games and feel privileged to be carrying the baton in Birmingham.”

For full details of the Queen’s Baton Relay see the B2022 website.

Founded in 1895 and a university since 1966, Aston is a long-established university led by its three main beneficiaries – students, business and the professions, and our region and society. Aston University is in Birmingham and at the heart of a vibrant city and the campus houses all the university’s academic, social and accommodation facilities for our students. Saskia Loer Hansen is the interim Vice-Chancellor & Chief Executive.

About the Birmingham 2022 Queen’s Baton Relay

Birmingham 2022 is hosting the 16th official Queen’s Baton Relay – a journey which brings together and celebrates communities in every corner of the Commonwealth ahead of Birmingham 2022.

The Baton is currently on an epic journey across the Commonwealth, where it is visiting Europe, Africa, Asia, Oceania, the Caribbean, and the Americas. It will return to England in June 2022 for the final countdown to the Commonwealth Games.

The Queen’s Baton will travel around England for 25 days, before the Relay officially ends at the Opening Ceremony of the Commonwealth Games on 28 July 2022. The Queen’s Baton Relay is a Games tradition that celebrates, connects and excites communities from across Commonwealth during the build up to the Games.

This collective journey will ignite hope, solidarity and collaboration for the next generation, with these stories leaving us all inspired to take on the challenges that matter most to us.