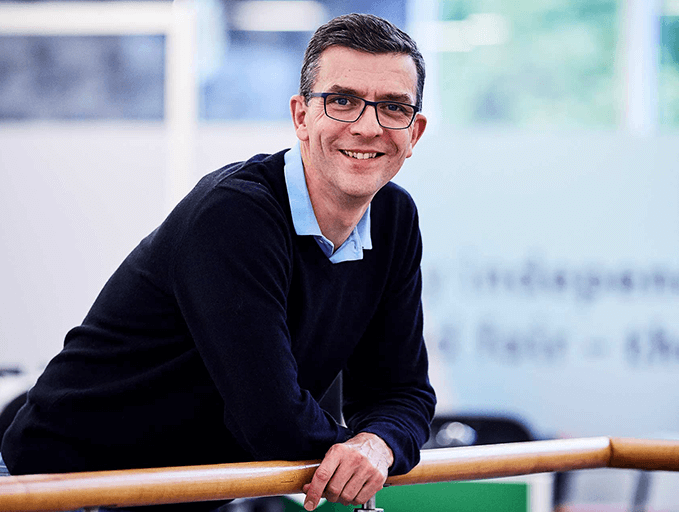 Successful businessman and  alumnus of Aston University, Matthew Crummack, has made a generous gift to help students in financial need, giving them the best chance of achieving their goals, despite the uncertainty of the Covid-19 job market.

Matthew’s own experiences of studying at Aston University in the 1990s were, he says, formative, and his significant donation will now be used to support University scholarships and the student hardship fund.

Matthew has been a long-time supporter of Aston University and is an enthusiastic spokesperson for its achievements, especially the University’s focus on employability.

He himself graduated from a BSc in International Business and French at Aston University in 1993. His career to date has taken him into well-known companies such as GoCompare, lastminute.com, Expedia, Nestlé and Procter & Gamble. In April 2020 he was appointed as Senior Independent Director on the main board of National Express plc.

Matthew was awarded an Honorary DSc by Aston University in 2016, in recognition of his professional achievements and service to the University.

Of his gift, Matthew said: “I count myself as fortunate to have had the opportunity of a good education, as it opened so many doors for me. My time at Aston University gave me confidence to go out, find a job and be motivated to work hard and do well. It also gave me lifelong friendships and a whole collection of happy (and funny) memories. I hope this gives young people who are struggling financially the opportunity and confidence to build a strong future for themselves.”

“We are delighted to receive this donation and so grateful to Matthew for his support. Thanks to his generosity, many Aston University students with financial difficulties can stop worrying about making ends meet and stay focused on achieving their ambitions.”