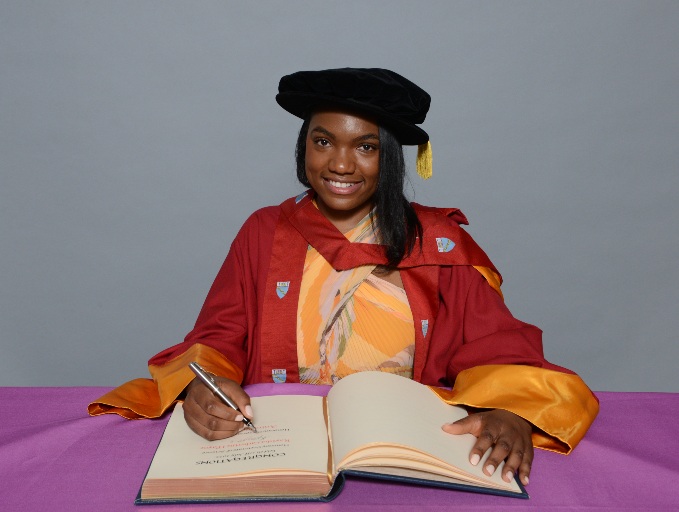 Aston University has awarded an honorary degree to Kayisha Payne in recognition of her significant contribution to the diversity of STEM subjects in schools and universities.

She received the honour on Thursday 21 July, during a week of ceremonies taking place between 18 and 22 July at The Eastside Rooms hotel and conference centre in Birmingham.

During Kayisha’s time in industry, she has amassed experience in the cosmetic industry (COTY) as a process engineer, playing a key lead in bringing a very popular product to market. She was most recently a biopharmaceutical process development scientist at AstraZeneca and is currently a healthcare and life sciences consultant.

She is also the founder of a non-profit organisation named BBSTEM whose mission is to encourage and support Black individuals in pursuing a successful career in STEM. Through this work she has been recognised by the Financial Times as one of The Top 100 Most Influential BAME leaders in Diversity and Tech (2018), a STEM Rising Star at The Black British Business Awards (2019), Top 50 Women in Engineering by the WES (2021) and others.

Kayisha said: “I am beyond grateful to receive such an honour from Aston University. I have seen many people I have admired and been inspired by become a recipient of such an award and I’m truly humbled that I have been recognised too, for doing something I’m passionate about.”

“Her work is vital to increasing diversity within STEM subjects and Kayisha’s organisation BBSTEM is a key part of this.

“Kayisha is also a talented and successful engineer, having worked in both the construction and health industries. She is definitely someone to watch and we are proud Kayisha is an alumna of Aston University.”