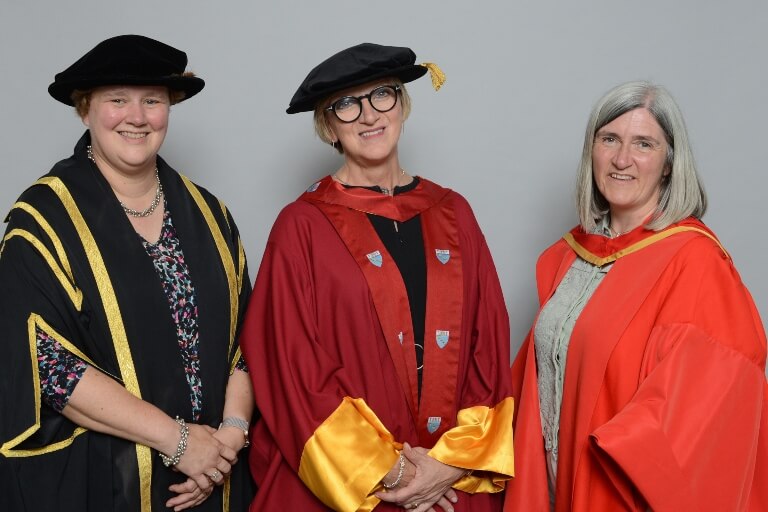 •     Dr Skorupska has been a prominent female in the field of STEM and received a CBE in 2016 for her services to renewables and promoting diversity in the energy industry.

Aston University has awarded an honorary Doctorate of Science to a leading STEM role model for her contribution to renewable energy and clean technology.

The accolade was conferred on Dr Nina Skorupska CBE by Sir John Sunderland, Chancellor of Aston University, in a ceremony on 8 September alongside graduands from the College of Engineering and Physical Sciences.

Dr Skorupska, Chief Executive of The Association for Renewable Energy and Clean Technology (REA), is keen to promote valuing diversity, women in STEM, action for renewable energy and climate change.

Prior to joining the REA in 2013, she worked for two decades for the RWE Group (and UK predecessors National Power and Npower) across fuel engineering and R&D, power station operations and trading. She held the privilege of being Npower’s first female power station manager and her last RWE role was CTO, Essent (RWE’s Dutch business).

Dr Skorupska is also a board member of TfL and REAL (an REA subsidiary) and she also advises the Carbon Trust, National Grid ESO and Energy Research Accelerator (ERA), among others. The ERA, which is at the forefront of energy transformation, draws on the expertise and world-class facilities of many of the Midlands Innovation group including Aston University and its Energy and Bioproducts Research Institute (EBRI).

In 2016 she received a CBE for her services to renewables and promoting diversity in the energy industry.

Professor Sarah Hainsworth, OBE FREng, Pro-Vice-Chancellor and Executive Dean of the College of Engineering and Physical Sciences, a keen advocate of diversity and inclusion in engineering, said:

“I am delighted that Aston University has bestowed this honour on Dr Skorupska in recognition of her work in leading the uptake of renewable energy. Nina is not only a role model in STEM, but also works tirelessly to promote diversity in the energy industry.

“There is a wealth of evidence to show that diversity is crucial to innovative thinking and developing creative ideas and that diverse and inclusive cultures lead to engineering outcomes that deliver for society’s needs.”

Professor Patricia Thornley, Director of EBRI, added: “This award aligns strongly with the priorities of the University’s Energy and Bioproducts Research Institute to combat climate change through its research into clean and renewable energy sources and move society towards a renewable energy future.”

Dr Skorupska welcomed over 300 industry representatives to the UK Green Gas Day conference on 9 September at the National Motorcycle Museum in Birmingham, covering policy and technical developments relevant to all green gases, including biomethane, low-carbon hydrogen, and bio-propane.