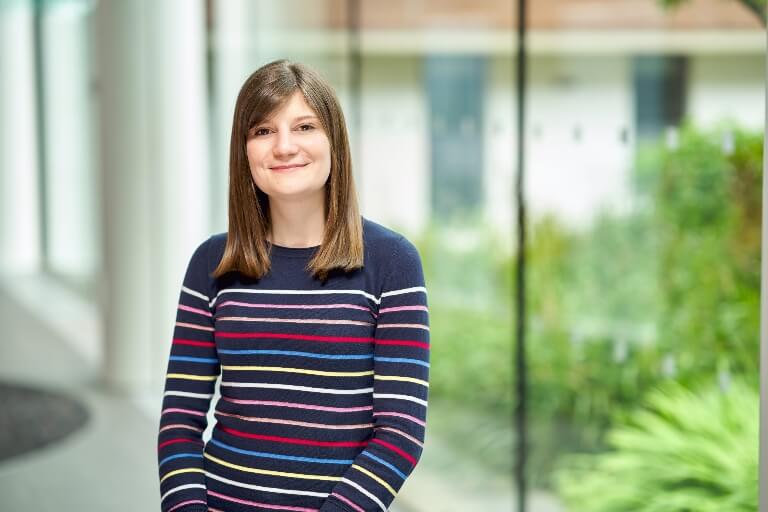 A star from Aston University’s Pharmacy School has been shortlisted for a prestigious award dedicated to celebrating technical excellence and innovation.

Hayley Smith has been nominated for an acclaimed Papin Prize in the category of best newcomer. The award is aimed at an individual who has embarked on a technical career within the past four years and has shown exceptional promise as a trainee or apprentice technician.

Now a clinical and cognitive sciences technical team leader, Hayley started working for the University in 2018 as a technician in Pharmacy, supporting both teaching and research before going onto support the Neuroscience Undergraduate Programme. She is also a supporter of the Technician Commitment and is part of Aston University’s Technician Commitment Engagement Group.

The award ceremony, which sees 61 technicians shortlisted for prizes across 10 categories, takes place on 10 November at the biannual Higher Education Technician Summit at the University of Nottingham.

Hayley said: “To be nominated for a Papin Prize is a lovely surprise. I’d like to thank those who nominated me for this award, and Aston University for supporting me develop my career as a technician.”

"A lot may have changed over that period, but one thing which has not changed is that technicians were, and remain, the cornerstone of our teaching and research activity. Without our technical colleagues, we would not function as a modern Pharmacy School and the recognition Hayley has received by being nominated for this award demonstrates the high level of skill and commitment she demonstrates, which ultimately benefits all of our students and staff.”

Kelly Vere project lead for TALENT who runs the awards, said: “Since launching, the Papin Prizes have become one of the most highly regarded rewards for technicians in our sector. It’s the only award ceremony which is wholly dedicated to celebrating the varied role of technicians and the work they do.

“The Papin Prizes provide national recognition for technicians and help to raise the profile and status of technicians within the sector. We wanted to offer two additional prizes to this year’s categories because of the valuable impact technicians have made during the pandemic. These recognise an individual or team who has played a significant role in the response of their institution to COVID-19 and it’s no surprise this was the most popular category.

“Congratulations to all individuals and teams who were nominated. Shortlisting is never an easy task and the fact we have more than sixty eligible is testament to the quality of submissions we received.”

The Papin Prizes are named after Denis Papin, a 17th century technician who worked with Robert Boyle. Papin invented the steam digester and was one of the first technicians to publish in his own name.

Nominations for the 2021 Papin Prizes are made by any member of the higher education community including students, staff, collaborators and alumni.