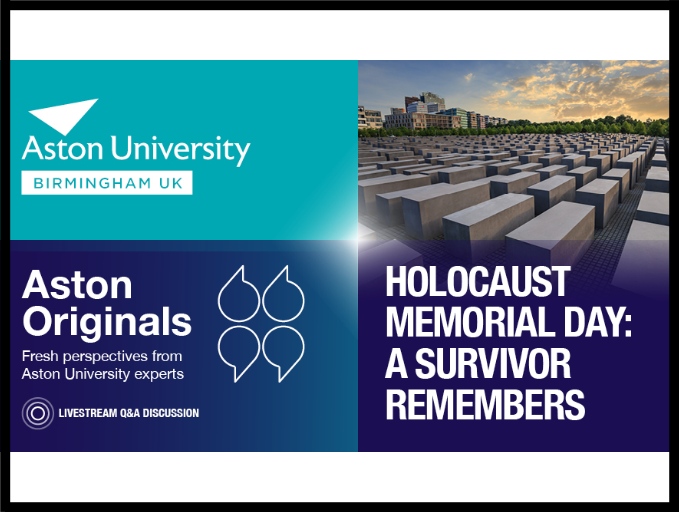 Aston University will host a livestreamed event with a holocaust survivor ahead of Holocaust Memorial Day.

The event will see 86 year old holocaust survivor Dorit Oliver-Wolff talk about her traumatic experiences as a child under the Nazi regime.

The University’s history experts and students have organised the panel discussion which will take place on 20 January, one week before Holocaust Memorial Day (27 January).

Holocaust Memorial Day is an annual reminder of one of the biggest crimes against humanity in the twentieth century.

Between 1941 and 1945, Nazi Germany and its collaborators systematically murdered some six million Jews across German-occupied Europe, around two-thirds of Europe's Jewish population.

Dorit Oliver-Wolff was given a British Empire Medal for services to Holocaust education and awareness in 2020. She has been giving talks to schools, community groups and businesses about her experiences for more than a decade.

Ms Oliver-Wolff was born in Novi Sad in Serbia - formerly Yugoslavia. In 1941, she and her mother fled and travelled from place to place within Hungary, creating new identities before hiding in a cellar, from where her mother would sneak out at night to look for food in bombed-out shops.

Her talk will be followed by questions from British and German students, as well as the general public, who can submit questions by 17 January.

“We like to think of the perpetrators of the Holocaust as completely different from ourselves. Yet this is not true.

“Today, in commemorating these events, we are not only listening to history. We are trying to ensure humanity never sinks so low again.”

You can sign up to the free event and submit a question for consideration HERE.