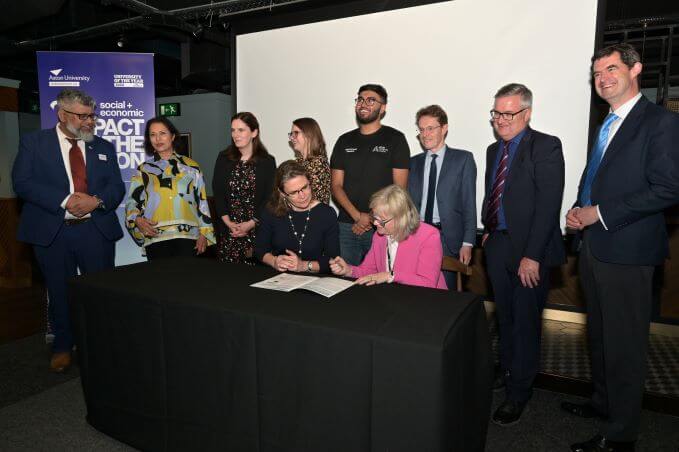 Aston University celebrated the official launch of its civic agreement with strategic partners from the city and region at an event hosted by Aston Villa Football Club on Wednesday 8 June.

The civic agreement was originally developed in March 2021, but the official signing and celebration ceremony had to be postponed due to the pandemic.

Aston University’s agreement sets out its commitment to wide-ranging collaborations on a range of themes centred around the recovery of the city and its citizens after COVID-19 through initiatives on improving health and wellbeing, reducing inequalities, support for businesses, environment and sustainability, crime and justice, and education and employment.

The event also showcased six of the projects involved in the agreement:

The concept of a civic university agreement was created after a thorough analysis by the Civic University Commission on the various civic projects universities around the country were delivering.

The analysis found that, although many universities were delivering projects of undoubtable civic benefit, it was much rarer to see evidence of civic strategy – backed by rigorous analysis of local needs and opportunities, ambitious objectives and a clearly articulated plan that made place-based civic engagement a core part of the university’s mission.

Saskia Loer Hansen, Interim Vice-Chancellor of Aston University, said:
“The civic university agreement demonstrates that Aston University is putting citizens at the heart of the region as we work together to recover from COVID-19.

“Our civic agreement demonstrates our commitment to working with our city and regional partners to bring about positive change for the people who live or work in or who visit Birmingham. As a civic university, our mission is to work with local citizens and regional bodies to make a transformational difference on issues that matter to them.

“Aston University strives to meet the needs of its beneficiaries, and our civic agreement sets out our commitment to wide-ranging collaborations on and beyond our campus that allow the open exchange of knowledge and insight with citizens.”

“This has been a true catalyst for other universities to follow suit and work with us across the UK.”

Cllr Brigid Jones, deputy leader of Birmingham City Council, added:
“Our universities are the beating heart of the UK’s youngest city, and Aston University is a cornerstone of future economic growth, allowing young people to fulfil their potential.”

To find out more about the civic agreement visit https://www.aston.ac.uk/about/region-and-society

For media inquiries in relation to this release, contact Nicola Jones, Press and Communications Manager, on (+44)7825 342091 or email: n.jones6@aston.ac.uk