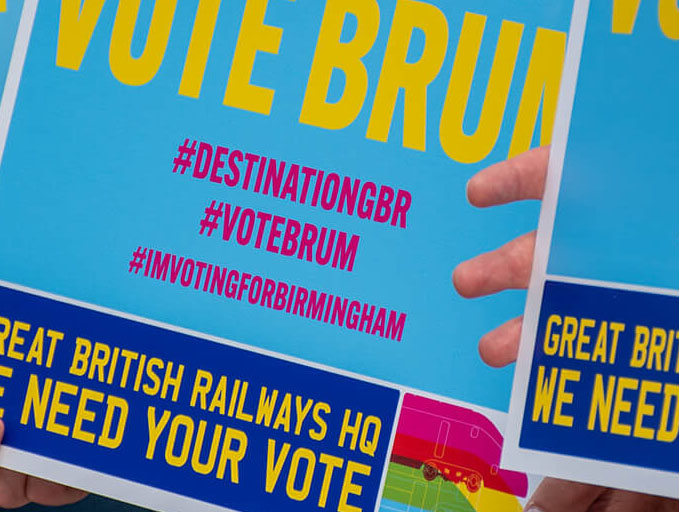 Aston University is backing the call for Birmingham to become the new home of Great British Railways (GBR).

GBR is the new body set up by government to oversee the nation’s rail transport. It will have responsibility for infrastructure, and also for contracting rail services, setting and collecting fares, and organising timetables.

As part of the decision-making process the government has asked for proof of strong local support.

Aston University has got behind the local campaign and is asking students, staff and the public to #VOTEBRUM.

University representatives were among those invited to a visit by Wendy Morton, minister of state in the Department for Transport (Tuesday 9 August)

Aston University has been producing transport graduates for more than 40 years. It is one of the few universities in the country to offer transport management degrees, and is the only institution to deliver a transport planning degree apprenticeship which meets the government-backed standard set by employer groups. In addition, the University has extensive expertise in the areas of logistics and supply chain.

Dr Angela Jeffery, the University’s Director of Regional Strategy said “As well as a strong case on paper the government is looking for strong local backing. That is why we’re asking members of the University, our stakeholders and the public to show their support for the Birmingham bid.

“We’ve proven we can host international events like the recent Birmingham 2022 Commonwealth Games to an impeccable standard. Now we’re asking everyone across the region to cast a quick online vote to help secure jobs, support more local businesses and attract more investment to the city and beyond.”

The #DESTINATIONGBR #VOTEBRUM campaign is led by the West Midlands Combined Authority (WMCA) and aims to show Birmingham as the natural choice for GBR due to its location at the heart of the country’s rail network including home to HS2’s head office.

Public voting officially ends on Monday 15 August, with a final decision being made by the government later in the year. To vote visit Great British Railways - Citizen Space (gbrtt.co.uk)