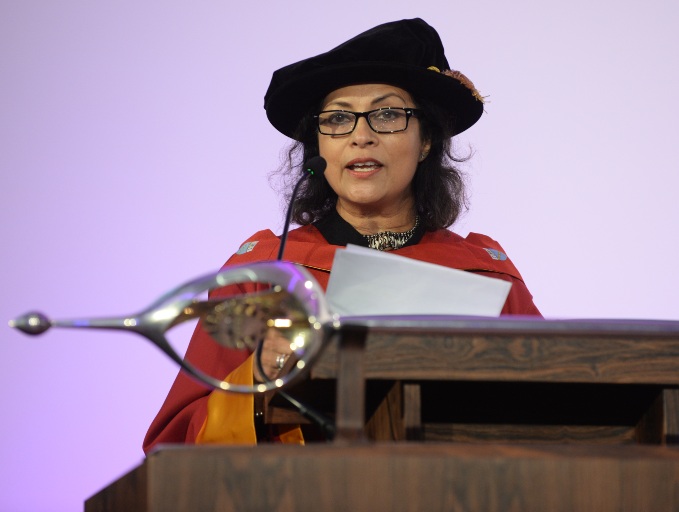 Anita Bhalla OBE has received an honorary doctorate from Aston University in recognition of her career which has spanned the media, the creative industries and social inclusion.

She has spent more than 25 years working with the BBC where her achievements include setting up the BBC Asian Network, making award-winning documentaries, becoming UK head and editor of the BBC's Public Space Broadcasting and president of Circom, a European-wide group of public service broadcasters.

Her commitment to the creative industries includes her current role as chair of B:Music, the charity that runs Symphony Hall and Town Hall Birmingham, and head of the Creative City Partnership, a sub group of the Greater Birmingham and Solihull Local Enterprise Partnership (GBSLEP). She is also a governor of the Royal Shakespeare Company and is a previous chair of the Midlands Arts Centre (mac)

Anita has a strong commitment to public services, initially training as a teacher, then working within the community in Leicester and Handsworth in Birmingham, where she set up and ran one of the first hostels for Asian women. She is a member of Birmingham's Social Inclusion Commission and was a non-executive director of Birmingham Women’s and Children's Hospitals NHS Trust. She is currently the interim chair of Greater Birmingham and Solihull LEP.

In 2009 Anita was awarded an OBE for services to broadcasting and communities, in 2012 Anita was the High Sheriff for the West Midlands, and in 2019 was named Brummie of the Year.

When she heard that she was to receive her latest honour she said: “I am delighted that Aston University is to present me with an honorary doctorate, particularly because universities and students are vital to our region’s economic, creative and social growth.”

Saskia Loer Hansen interim Vice-Chancellor of Aston University said: “Anita has a diverse career and has held a number of important roles which have helped highlight the immense talent and skills Birmingham and the West Midlands has to offer. I am delighted that she will be conferred with this honour to mark the extensive contribution she has made to the region.”

Aston University is holding its summer 2022 graduation ceremonies between 18 and 22 July.