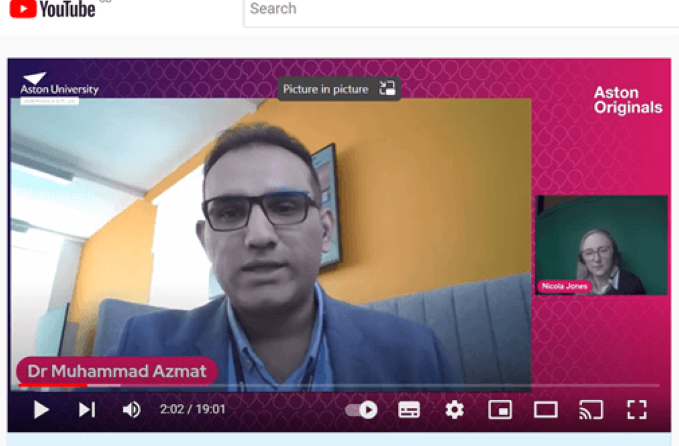 The Russian invasion of Ukraine has led to a serious humanitarian crisis, but according to an Aston University expert, drones and autonomous vehicles could deliver aid without putting more lives at risk.

Dr Muhammad Azmat is an assistant professor in logistics and supply chain management at the University’s Department of Engineering Systems and Supply Chain Management.

In the first Aston Originals video to be produced by Aston University’s College of Engineering and Physical Sciences he discusses how in a volatile situation technology could be applied to minimise risk to humanitarian aid workers on the ground.

Dr Azmat has a business and management background, with a PhD in transport, logistics and supply chain management and has worked on several international projects to identify the potential impact on different business sectors of disruptive technologies such as electric and autonomous vehicles.

He believes that the cost of human loss of life makes the increased use of technology in disaster situations very attractive. He states that, on average, 100 aid workers lose their lives each year trying to save other people and in 2020, around 117 aid workers died around the globe. Providing supplies to people in need could be done faster and much safer by drones and robots.

He said: “If a drone is shot down it could mean a loss of equipment of £15 to £20,000 but a person’s life measured statistical is worth $10m – and that’s without taking into account the emotional trauma caused when a human loses their life.”

He points out that although an initial shipment of 10 drones was sent to Ukraine, to make a real impact more drones from more manufacturers are needed.

While drones have come out of the pilot phase and have been used in humanitarian crises, Dr Azmat said that autonomous vehicles are not quite there yet. However, he believes they have significant potential in this context.

He said: “Autonomous vehicles are capable of completing complex tasks of driving, delivering and decision making. They can move from point A to point B, transporting people and products without the need for active input from humans.

“Use of these vehicles can overcome the logistical challenge of driver shortages in a disaster situation, drivers getting tired and, in some countries, there are legal limits to the hours drivers can be behind the wheel. So, a future with autonomous vehicles without active human involvement would avoid a bottleneck of lack of drivers”.

All of the Aston Originals content is available through a dedicated YouTube channel to reach new, relevant audiences.
Dr Azmat has also written an article on this topic which has been published by The Conversation.