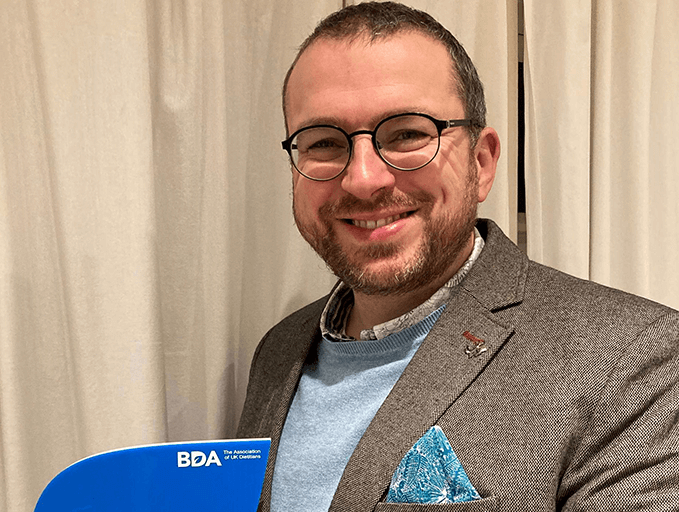 Dr Duane Mellor, a senior teaching fellow at Aston Medical School, has been named Media Spokesperson of the Year at the British Dietitian Association Awards.

The award is given to volunteer members who show great commitment to offering evidence-based nutritional information across TV, radio, digital and print media.

The judging panel said: "Duane has played an integral role in raising the profile of dietitians in the media and is a highly valued British Dietitian Association (BDA) spokesperson. He uses his platform to communicate scientifically accurate messages, helping people make informed decisions about their own food choices and health.

"Duane contributes not only as a spokesperson but as part of the editorial board of the public facing magazine, Healthier You. He consistently and effectively offers clear and engaging expert advice, ensuring that the dietetic voice cuts through the noise and myths surrounding nutrition."

Commenting on his award, Duane said: “It is great to be recognised as a spokesperson for our profession and the BDA. The reason I started to respond to media requests and become a spokesperson was not to seek attention or fame, it was about frustration linked to some of the nutrition messages portrayed in the media.

“This award is not just for me - it’s for the Diabetes Specialist Interest Group and others in the BDA, Aston University and Healthier You, as media work involves teams. It is also so good to be acknowledged for communicating sound science-informed messages to the public in a kind, balanced and inclusive way.”

The achievements of its members were celebrated at the BDA Virtual Awards in November, which saw 200 people celebrating their colleagues.

BDA Chair, Caroline Bovey said: "This is the Association event of the year in which we celebrate the phenomenal achievements of so many of our members, our specialist groups and our regional branches. Whilst we are still experiencing the effects and impacts of the COVID-19 pandemic, it is clear that we have so much to celebrate together."