The Arms of Aston University

The University’s Arms were granted on 18 March 1955 by Garter, Clarenceux and Norroy and Ulster Kings of Arms to the Birmingham Corporation for use by the former College of Technology. They were designed to show the College’s connection with the city and with the teaching of technology.

The Arms consist of a shield and crest. The shield has two sections - the field (the main background) which is coloured blue and a chief (the broad band across the top of the shield) of silver. On the field is a diagonal line of five gold diamonds joined one to the other. In the Royal Charter document this is described as "Azure five lozenges conjoined in bend or" ("Azure" is the blue background and "bend or" is heraldic terminology for "gold band"). The five gold lozenges conjoined in a diagonal "bend" is taken from the first quarter of the Arms of the city of Birmingham.

Those Arms were themselves taken from the original Lords of the Manor - the de Bermingham family - who used them from about 1413 to 1536. The fact that the city of Birmingham's Arms are directly referenced in the Arms of the College of Technology show how closely this educational institution was - and still is - entwined with the city and with industry.

On the chief is depicted an open book bound in red, placed between two black hammers (the Charter describes it as an "open book proper bound gules edged or between two hammers erect sable"). This shows the connection of the University with industry; the book represents learning and the hammers, engineering and allied trades. Again, compare it to the City of Birmingham's Arms which are topped by a man's arm brandishing a hammer, but note that Aston University's are of a different type known as a ball-pein hammer. This hammer is specific to metalworking, with the round head used to smooth off the edges of metal pins and rivets and the flat head useful for striking punches and chisels. 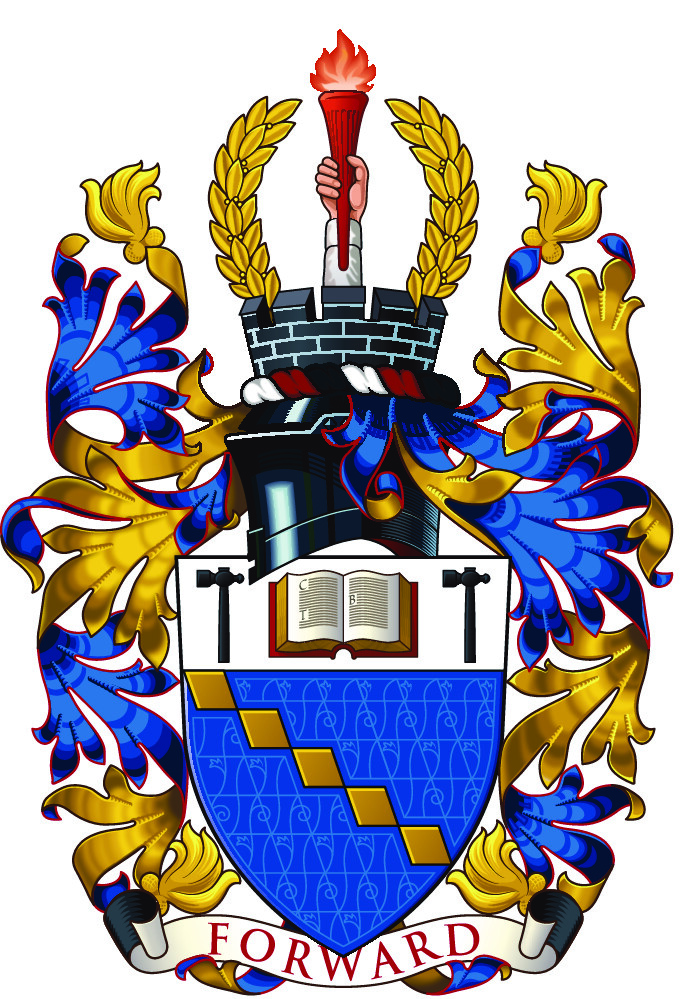 The crest is also designed to stress the pursuit of knowledge. It consists of a red torch held erect by a forearm (known as a "cubit arm") between two branches of gold laurel. The laurel traditionally symbolises academia and learning, but it may have a dual purpose here; following the incorporation of Birmingham as a borough in 1838, the corporation adopted a seal comprising the de Bermingham family Arms encircled by a laurel wreath. So the laurel branches in Aston's crest could well be another echo of the links with Birmingham itself.

Having been originally worn on the helmet of a fully-armed person, the crest is always placed on the top of the helm. The method of joining the crest to the helm was usually concealed by decoration and, in the University’s Arms, this is effected by the use of a wreath and a crown.

The wreath is silver, red and black, these colours being taken from the shield. It is surmounted by a black mural crown (resembling a wall) which is reserved in modern grants for persons and organisations connected with public corporations. This part of the crest is described by the Charter document as follows: "Out of a mural crown sable a cubit arm vested argent the hand proper holding a torch gules enflamed also proper between two branches of laurel".

Finally, the cloth mantling which hangs down from the top of the helm is the survival of the cloak which was originally worn to protect the armour - it is coloured in the two principal colours of the shield, blue and gold.